Through the voting game Prezident 21, we wanted to introduce D21 - Janeček method to the public, and find such a president, on whom the largest amount of people agreed. In this game a player could use up to 3 plus votes and 1 minus vote.

The voting game Prezident 21 was a pilot project of the Institute. Our aim was to familiarise the general public with functioning of D21 - Janeček method. We used the current trends; presidential elections and online voting, so people could try out the method in practice and grasp its main advantages. The project’s aim was also to increase the general interest in the presidential election start up a debate on alternative voting systems and the role of new technologies in politics.

Everyone could use up to three positive votes and one negative vote. The effect of multiple votes allows that the game found the most consensual presidential candidate. During a time of visible polarisation of Czech society, electing such a person could help society's reunification. The game presents a key quality of the Janecek voting system, searching for the most acceptable winner for the maximum possible number of voters.
‍

The first phase of the game started on 21 December 2016 and run up to 24 November 2017 when users could nominate any personality fulfilling real conditions for presidential candidacy. Visitors generated a “catalog” of over 600 popular Czech personalities and politicians. This support was meant to motivate these candidates to run for the real office. In the second phase from 24 November 2017 onwards it was only possible to vote for official candidates.

The web was the place to find all information regarding the presidential election; it assembled relevant reports in the media, and mainly offered detailed profiles of all official candidates. We succeeded in directly engaging all candidates in the game except for Miloš Zeman, the president. Leading up to the elections we also created so-called Voting Advisor. This feature helped users compare opinions of the candidates and assess who they agree with the most. The Advisor was filled out by a total of 227, 864 users.

Results of voting and the effect of multiple votes 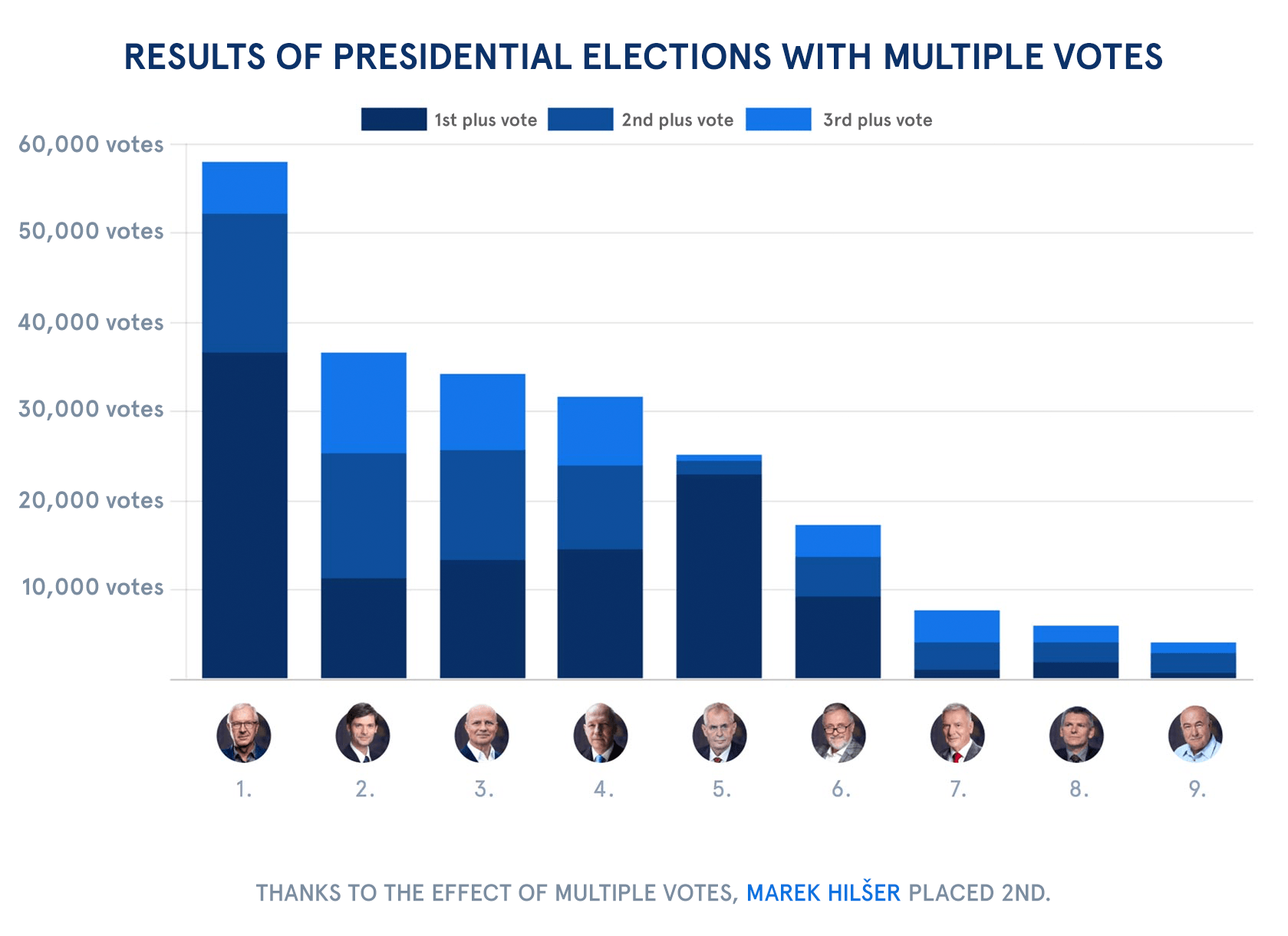 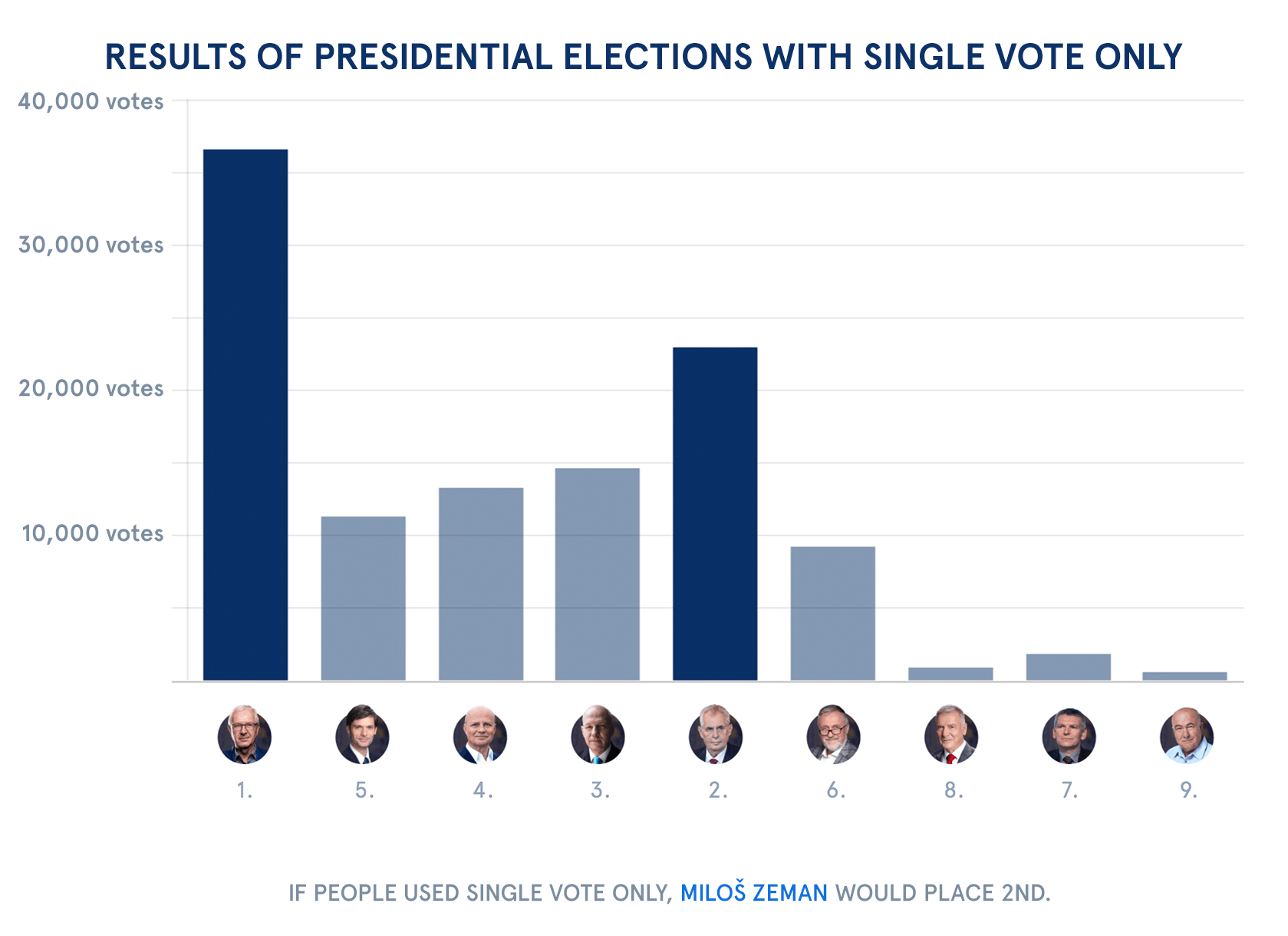 The second phase of the game ended with the first round of elections, on 13 January 2018, and its winner became Professor Jiří Drahoš. Thanks to the effect of multiple votes, Marek Hilšer placed second as he received many second and third votes. President Miloš Zeman, on the other hand, lost due to accumulation of too many minus votes, despite his popularity and victory in the real elections. Having a large portion of both minus and plus votes indicates candidates’ controversy.

The target group of the game was made up of legal voters of the Czech Republic, therefore men and women aged 18 and over having the right to vote. To avoid manipulation of the voting, players had to verify via SMS.

In order to validate our online results, we conducted a terrain research, during the election days of the first round, on a representative sample (2,500+) of the Czech Republic. The agencies MEDIAN and STEM/MARK performed the research for us. The field survey [PDF] confirmed victory of Jiří Drahoš and specified the order of other candidates in comparison with results of the online game.

Summary of the project

The game proved that the Method with multiple votes is naturally understandable for voters. Analysis of the results supports that if Czechs could use multiple votes, the elections would have ended up differently, and a greater part of the Czech population could have been satisfied with the results. Among the main rivals of the election - Miloš Zeman and Jiří Drahoš - a major overlap of voters existed: a total of 33 % of those voting for Miloš Zeman gave one of their other votes to Jiří Drahoš, and conversely it was 5 % less.

Miloš Zeman won in the current official two-round majority system of the presidential election, despite being a strongly polarising candidate. His voters seem to be less willing to sympathise with other candidates. 83 % of those surveyed used the opportunity to cast multiple votes, and 77.5 % utilised the minus vote. On the other hand, a minority of voters (17 %) decided only to cast one vote. Two-thirds of these voters then voted for the current president himself. The greatest proportion of the electorate using only one vote were the voters of Communist Party (35 %), people with primary school education (28.1 %) and people over 70 years of age (25.1 %). On the contrary, people with higher education and younger people were more likely to distribute all votes, and thus fully utilising the full potential of the
‍D21 - Janeček method.
‍

Complete results of the field survey >

former director of the Academy of Sciences of the Czech Republic, candidate for President 2018

“I think that what Mr. Janeček has introduced is a very good test. I am a bit skeptical towards it’s implementation right away, but I’m a scientist who is well familiar with modelling and consequent scaling up. I am happy that this game is running. I don't want to say that this system should be applied immediately for the next presidential elections, of course, I like it personally, as a model.”

“I’m not a scientist, but I can see several positive aspects of this algorithm. Firstly, it makes people more interested in politics and public affairs, and that seems very positive to me. Secondly, the extremes are cut out, which I consider useful, because of the intense polarisation that is occurring – and we're witnessing it here at home too – which is at the expense consensus. It seems to me that this is an algorithm that helps in that regard. Of course, it must be tested. If and when to introduce, from my conservative point of view, for now it should not touch the Constitution. Undoubtedly  it is a great model for evoking public discussion on important questions. Otherwise, I think that also Referendum 21 is being considered, and it is a very good way of naming true questions that are only just now arising.“

“As some say, your words are not just yes yes - no, no’. I think that deciding between YES and NO is not always the best. There exists an entire range between the YES and the NO, and in this aspect, I like this system. Not only because I ended up second in the game, but because I think that this system contributes to searching for a certain compromise. It selects a candidate who is acceptable for broader society, which is fine in presidential elections. And I myself as a citizen, as a voter, I would be happy if I could give my vote to multiple people and would not have to make hard decisions on who is YES for me and who is NO. In this regard, I like it.”

“I don't like this system at all, it is not good for presidential elections. I think it is a good thing if citizens, for example in our community of Roudnice,  want to decide whether they would like to build a winter stadium or a children's playground. Because there it is important for people to eliminate unpopular options. But in real presidential elections no negative votes exist, thank God. In presidential election it is  necessary to find a true personality, and that one always has a lot of critics, and thus more critical voices. It makes sense, because such a person stands for something and defines himself or herself as against something. With this system of yours, in the presidential election, you would produce distilled water with neither taste nor odour. But I want proper, decent water.”