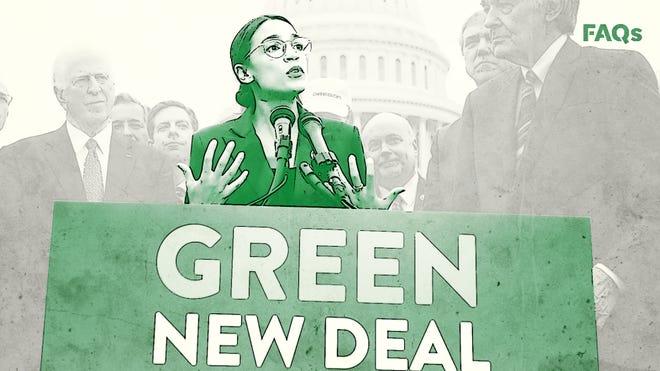 The Green New Deal: A Model for India?

The Green New Deal is a resolution introduced to the Congress of the United States by the representative of New York’s 14th district, Alexandria Ocasio-Cortez and the Senator from Massachusetts, Ed Markey, both of whom are members of the liberal democrat party. The deal calls upon the Central Government to wean the country off fossil fuels, reducing the emissions of greenhouse gas across the economy. The deal also ensures well-paid jobs in renewable energy industries. This resolution, if passed, will not become law.

The Green New deal addresses the climate change crisis, and lays out a plan to curb greenhouse gas emissions, and also address social problems such as race discrimination and income inequality. This resolution includes a ten year plan to decrease greenhouse gas emission and to move from non renewable resources as a source of power, to a renewable and more clean form. It also has a plan to upgrade all buildings to make them more energy efficient and also bring in electric transport, modernizing the country’s transportation system.

One might reason that climate change is a problem caused by western countries, so it should be upto them to solve it. So why should India care about climate change?

One reason is that the picturesque coastlines and beaches of India would be destroyed with the consequences of climate change. Rapidly rising sea levels and the loss of livelihood for people who live near those areas is one crisis that is already visible in parts of India. The occurrence of lethal heat waves would become the new normal. Natural disasters such as the breaking of the Himalayan glacier in Uttarakhand, causing massive flooding and the deaths of many, or Cyclone Fani and Cyclone Yaas, the deadliest cyclone to hit the Eastern states of Odisha and West Bengal.These fatal natural disasters would only become more and more frequent.

India is the third largest carbon emitter in the world. We have kept to our pledge in the Paris Climate Agreement in fact, we are outperforming it. India has been ranked in the top ten countries in the climate change performance index, for two consecutive years. But this may not be enough to help prevent this crisis, and that’s where the Green New Deal comes into the picture.

While the Indian Government has focused on Climate Change in the past, it has never been incorporated in the government’s main domestic agenda. While many state governments may have held the need for progressive policies for tackling climate change, they have often been confined to the backstage by the Central Government. Most policies have concerned other, still-prevalent problems plaguing the motherland, such as the lack of sanitation and hygiene, further highlighted by the onset of the COVID-19 pandemic. Most policies implemented regard “Atma Nirbhar Bharat”, a slogan roughly translating to “self dependent India”. However, as the west continues to progress in tackling climate change, it seems India will be joining the good fight too. His Excellency the Prime Minister of India, while delivering the annual speech from the iconic Red Fort, pivoted from the usual extreme nationalism to focusing on climate change.

Some of the plans featured in the speech were the National hydrogen Mission which aims to produce green hydrogen and fuel cells, as well as the conversion of India’s countrywide railway system’s power source to electricity. Other parts underlined were the subsidies given to produce the eco-friendly, electric vehicles.

But can the United State’s Green New Deal, as dynamic and progressive as it is, fit the vast and diverse puzzle of the climate change crisis in India?

It depends on the extent to which it is implemented. The Green New Deal aims to eliminate carbon emissions by 2030, which may prove difficult to complete. The country has reached its far and wide ends in terms of providing access to basic needs. We still are heavily dependent on coal and with the huge population and the limited resources we have to provide the people, we need all the resources we can get.

But we are rapidly progressing. We currently rank third in the renewable energy country attractive index. In the modern metropolitans of the nation including Mumbai, Delhi, Chennai and Kolkata, there is usage of renewable resources to power parts of these cities.

The Green New Deal also talks about Restoring ecosystems through land preservation, afforestation, and science-based projects. India joined the Bonn Challenge in 2015 with a pledge to restore 21 mha of degraded and deforested land. This was raised to target of 26 mha by 2030 during the United Nations Convention on Combating Desertification Conference held in Delhi in September 2019 and has also invested in many projects such as Project Tiger' in Jim Corbett National Park, 'Project Elephant' in Dooars Region of West Bengal, 'Project Dolphin' at Chilika Lake.

While the Green New Deal may be too advanced to be implemented in India to its entirety, parts of the resolution may still prove to be successful in India. As a rapidly developing country. With a growing economy and a large population, India is very much set to become one of the world’s foremost super powers in the near future. The increasing carbon footprint of India needs to be controlled. Rather than undertaking the complex task of forming its own climate change proposal, it is recommended that India adopt the model of the Green New Deal for its own contexts. ‍